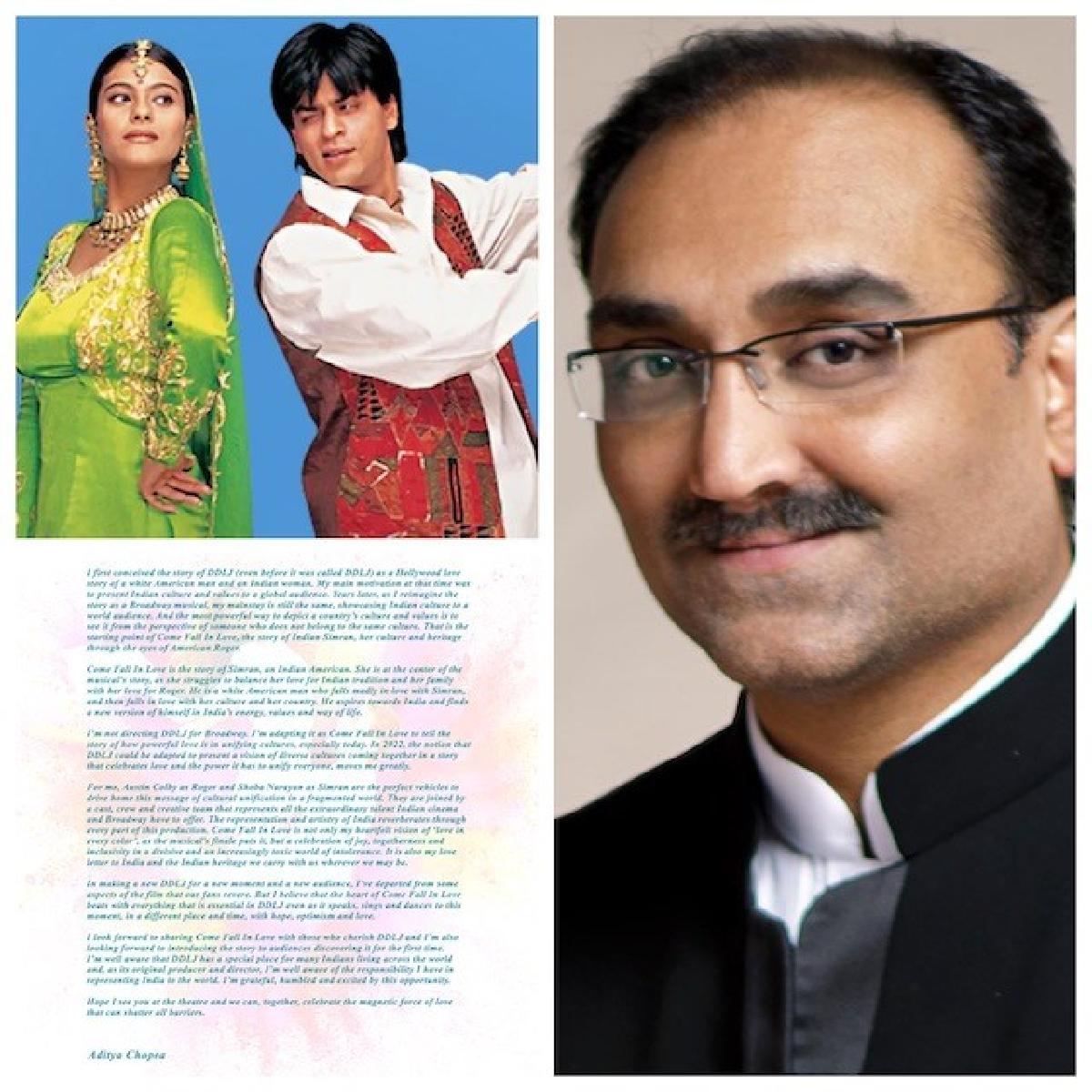 Filmmaker and producer Aditya Chopra pens a note as his Broadway musical Come Fall In Love, inspired by DDLJ to open at San Diego.
Come Fall In Love is inspired by one of the biggest hits in Indian cinema, Dilwale Dulhania Le Jayenge, the show will open in San Diego on September 14 and will continue till October 16.

The official handle of Yash Raj Films shared the news on social media saying, “Aditya Chopra’s Broadway-bound musical Come Fall In Love (CFIL) is set to open at The Old Globe, San Diego on September 14. Here’s his note inviting people to see a celebration of love on stage…The musical’s official Opening is on Wednesday, September 14 and will run through October 16. #ComeFallInLove @theoldglobe”

Aditya Chopra penned the note saying, “I first conceived the story of DDLJ (even before it was called DDLJ) as a Hollywood story of a white American man and an Indian woman. My main motivation at that time was to present Indian culture and values to a global audience. Years later, as I reimagine the story as a Broadway musical. My mainstay is still the same, showcasing

Indian culture to a world audience. And the most powerful way to depict a country’s culture and values is to see it from the perspective of someone who does not belong to the same culture. That is the starting point of Come Fall In Love, the story of Indian Simran, her culture and heritage through the eyes of American Roger.”

“Come Fall In Love is the story of Simran, an Indian American. She is at the center of the musical’s story, as she struggles to balance her love for Indian tradition and her family with her love for Roger. He is a white American man who falls madly in love with Simran and then falls in love with her culture and her country. He aspires towards India and finds a new version of himself in India’s energy, values, and way of life.”

“I’m not directing DDLJ for Broadway. I’m adapting it as Come Fall In Love to tell the story of how powerful love is in unifying cultures, especially today. In 2022, the notion that DDLJ could be adapted to present a vision of diverse cultures coming together in a story that celebrates love and the power it has to unify everyone moves me greatly”

“For me, Austin Colby as Roger and Shoba Narayan as Simran are the perfect vehicles to drive home this message of cultural unification in a fragmented world. They are joined by a cast, crew, and creative team that represents all that extraordinary talent Indian cinema and Broadway has to offer. The representation and artistry of India reverberates through every part of this

production. Come Fall In Love is not only my heartfelt vision of ‘love in every color’ as the musical’s finale puts it, but a celebration of joy, togetherness, and inclusivity in a divisive and an increasingly toxic world of intolerance. It is also my love letter to India and the Indian heritage we carry with us wherever we may be”

“In making a new DDLJ for a new moment and new audience, I’ve departed from some aspects of the films that our fans revere. But I believe that the heart of Come Fall In Love beats with everything that is essential in DDLJ even as it speaks, sings and dances to this moment, in a different place and time, with hope, optimism, and love. I look forward to sharing Come Fall In

Love with those who cherish DDLJ and I'm also looking forward to introducing the story to audiences discovering it for the first time. I'm well aware that DDLJ has a special place for many Indians living across the world and, as its original producer and director, I'm well aware of the responsibility I have in representing India to the world. I'm grateful, humbled, and excited by this

opportunity. Hope I see you at the theatre and we can, together, celebrate the magnetic force of love that can shatter all barriers,” he concluded by signing off as Aditya Chopra.
DDLJ starred Shah Rukh Khan, Kajol, Farida Jalal, Parmeet Sethi and late actor Amrish Puri.