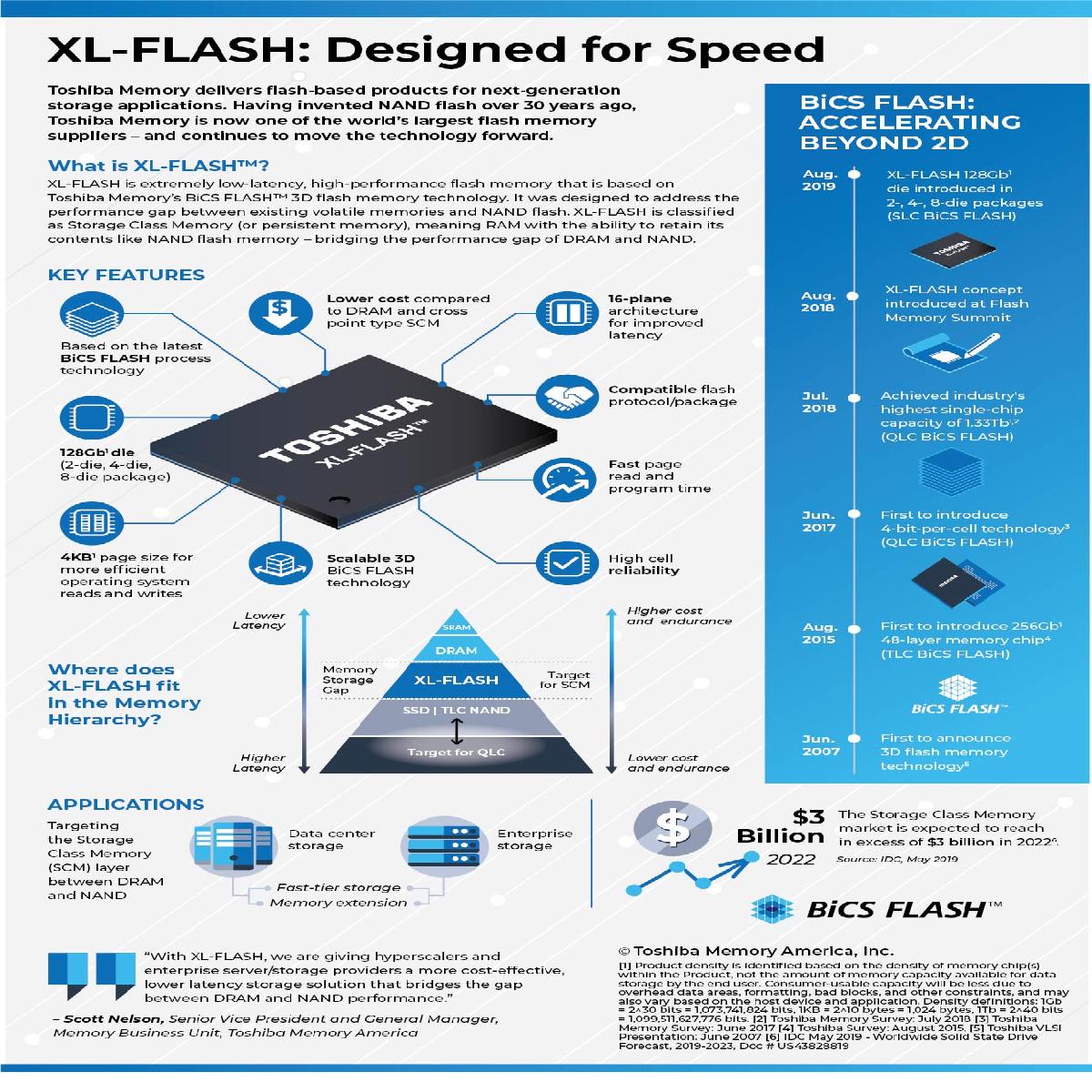 Kioxia Corporation, the world leader in memory solutions, today announced the launch of the second generation of XL-FLASH™, a Storage Class Memory (SCM) solution based on its BiCS FLASH™ 3D flash memory technology, which significantly reduces bit cost while providing high performance and low latency. Product sample shipments are scheduled to start in November this year, with volume production expected to begin in 2023.

The second generation XL-FLASH™ achieves significant reduction in bit cost as a result of the addition of new multi-level cell (MLC) functionality with 2-bit per cell, in addition to the single-level cell (SLC) of the existing model. The maximum number of planes that can operate simultaneously has also increased from the current model, which will allow for improved throughput. The new XL-FLASH™ will have a memory capacity of 256 gigabits*1.

Kioxia’s second generation XL-FLASH™ memory solution is engineered to bring higher performance and lower cost for data centers and enterprise servers and storage systems. In the future, it may also be possible to apply the product using CXL (Compute Express Link). Kioxia will continue to develop cutting-edge technologies and products to meet the needs of the expanding SCM market.

Kioxia will feature the second generation XL-FLASH™ during its keynote presentation at the Flash Memory Summit 2022 in Santa Clara, California on August 2.

*1 Two, four, or eight layers of chips can be stacked in one package.

※All company names, product names, and service names may be trademarks of their respective companies.

Kioxia is a world leader in memory solutions, dedicated to the development, production and sale of flash memory and solid-state drives (SSDs). In April 2017, its predecessor Toshiba Memory was spun off from Toshiba Corporation, the company that invented NAND flash memory in 1987. Kioxia is committed to uplifting the world with memory by offering products, services and systems that create choice for customers and memory-based value for society. Kioxia's innovative 3D flash memory technology, BiCS FLASH™, is shaping the future of storage in high-density applications, including advanced smartphones, PCs, SSDs, automotive and data centers.