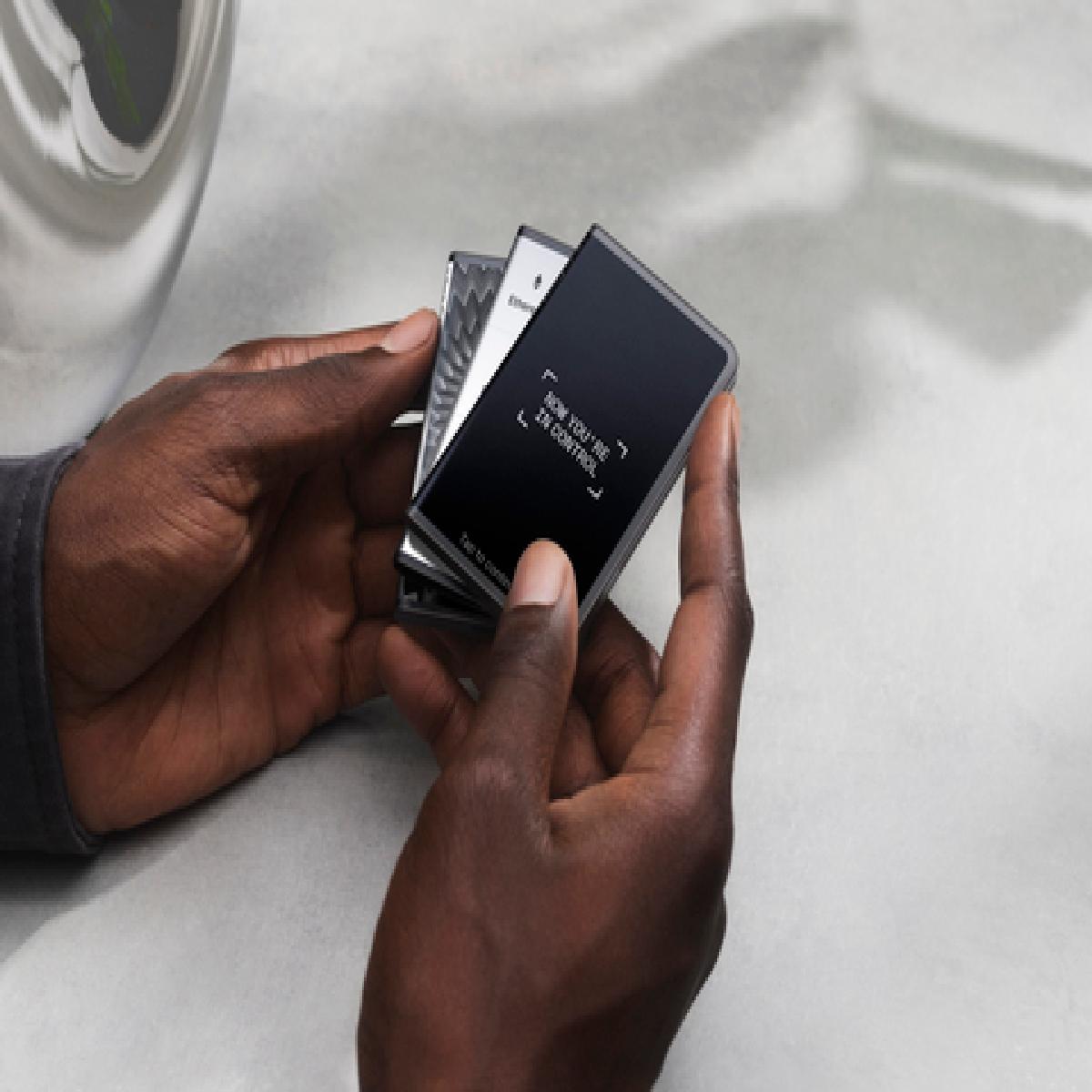 Ledger, the world leader in critical digital asset security, has teamed up with Tony Fadell, builder of the iPod1, to bring clarity and confidence to owning digital value. Ledger Stax™ is a usable way for you to take control of cryptocurrency and digital collectibles. It’s built on uncompromisingly secure architecture, and introduces a unique form designed for unprecedented accessibility and interactivity.

Ledger Stax has a new E Ink2 display, which covers the front and curves around the spine—you can view complete transaction details at a glance. E Ink is always viewable: your favorite art appears on the Ledger Stax screen, even when it is off. It also provides unmatched energy efficiency, so the battery can last for weeks or even months on one battery charge.

“With the Ledger Nano™ series, we created the most successful digital asset security hardware of all time—with more than 5 million sold and none ever hacked,” says Pascal Gauthier, CEO and Chairman of Ledger. “Digital assets are increasingly about identity and digital ownership, not just crypto like Bitcoin. The time is now for a device for more mainstream users. At the same time, we must not compromise on security. This is Ledger Stax—secure and accessible.”

Tony Fadell designed Ledger Stax, in collaboration with Layer, as a credit card-sized device with integrated magnets, making them easily stackable, particularly for those who own multiple devices. The curved E Ink spine shows what’s inside, like a book on a shelf. Ledger Stax uses secure USB-C to connect to the comprehensive Ledger Live™ app on your laptop, and Bluetooth®3 to connect to the Ledger Live Mobile app on your smartphone. It will utilize Ledger Connect, our upcoming crypto wallet extension, to connect to Web3 apps from anywhere. Ledger Stax also supports wireless Qi charging.

“Digging into Ledger’s proven security technology and trying all the ‘best’ hardware wallets out there convinced me to build a next-gen device with Pascal, Ian and the amazing Ledger team,” says Tony Fadell, designer of Ledger Stax and Principal at Build Collective. “We need a user-friendly…no! A ‘user-delightful’ tool, to bring digital asset security to the rest of us, not just the geeks.”

The new user interface enables clear, intuitive interaction. Out of the box, Ledger Stax lets you manage your NFT collection and over 500 coins and assets. The touch interface empowers Ledger’s exceptional developer community to build innovative Web3 applications that are more accessible, with uncompromising security.

Ledger Stax will be available by the end of March 2023. You can pre-order today on Ledger.com. In the future, it will also be available from select retailers such as BestBuy in the United States.

Every Ledger Stax includes the [ Ledger ] Infinity Pass, providing a free NFT and future benefits. Furthermore, a Ledger Stax NFT is available to mint on [ L ] Market to unlock access to an exclusive piece of NFT artwork from Ledger’s network of hand-picked artists, and also redeem a Ledger Stax device. [ L ] Market Genesis Pass holders have special mint-priority for this mint.

“Tony Fadell has both the circuit board and the billboard in mind when he builds a product,” says Ian Rogers, Chief Experience Officer at Ledger. “With Ledger Stax we have made a device which is cool, beautiful, and fun. Together we have fused the uncompromising security and self-custody culture of Ledger, with the equally uncompromising user-experience-focused culture of Tony and his team. The result is the first true secure consumer hardware device for the revolution of value brought by blockchain technology.”

Founded in Paris in 2014, LEDGER is a global platform for digital assets and Web3. Ledger is already the world leader in critical digital asset security and utility. With more than 5M devices sold to consumers in 200 countries and 10+ languages, 100+ financial institutions and brands as customers, 20% of the world’s crypto assets are secured, plus services supporting trading, buying, spending, earning, and NFTs. LEDGER’s products include: Nano S Plus, Nano X hardware wallets, LEDGER Live companion app, [ LEDGER ] Market™, the world’s first secure-minting and first-sale distribution platform, and Ledger Enterprise. With its ease of use, LEDGER allows a user to begin investing in digital assets and ultimately, achieve financial freedom in a safe and stress-free environment.

With Ledger Stax, Ledger has a number of new designs and patents pending, including a large screen, a chassis with a rounded edge covered by the screen and displaying information, its magnet system allowing it to be stacked with other similar devices, and its efficient Bluetooth® antenna.

1. iPod is a trademark of Apple Inc., registered in the U.S. and other countries and regions.

2. E Ink is a registered trademark of E Ink Corporation.

3. The Bluetooth® word mark and logos are registered trademarks owned by Bluetooth SIG, Inc. and any use of such marks by Ledger is under license.