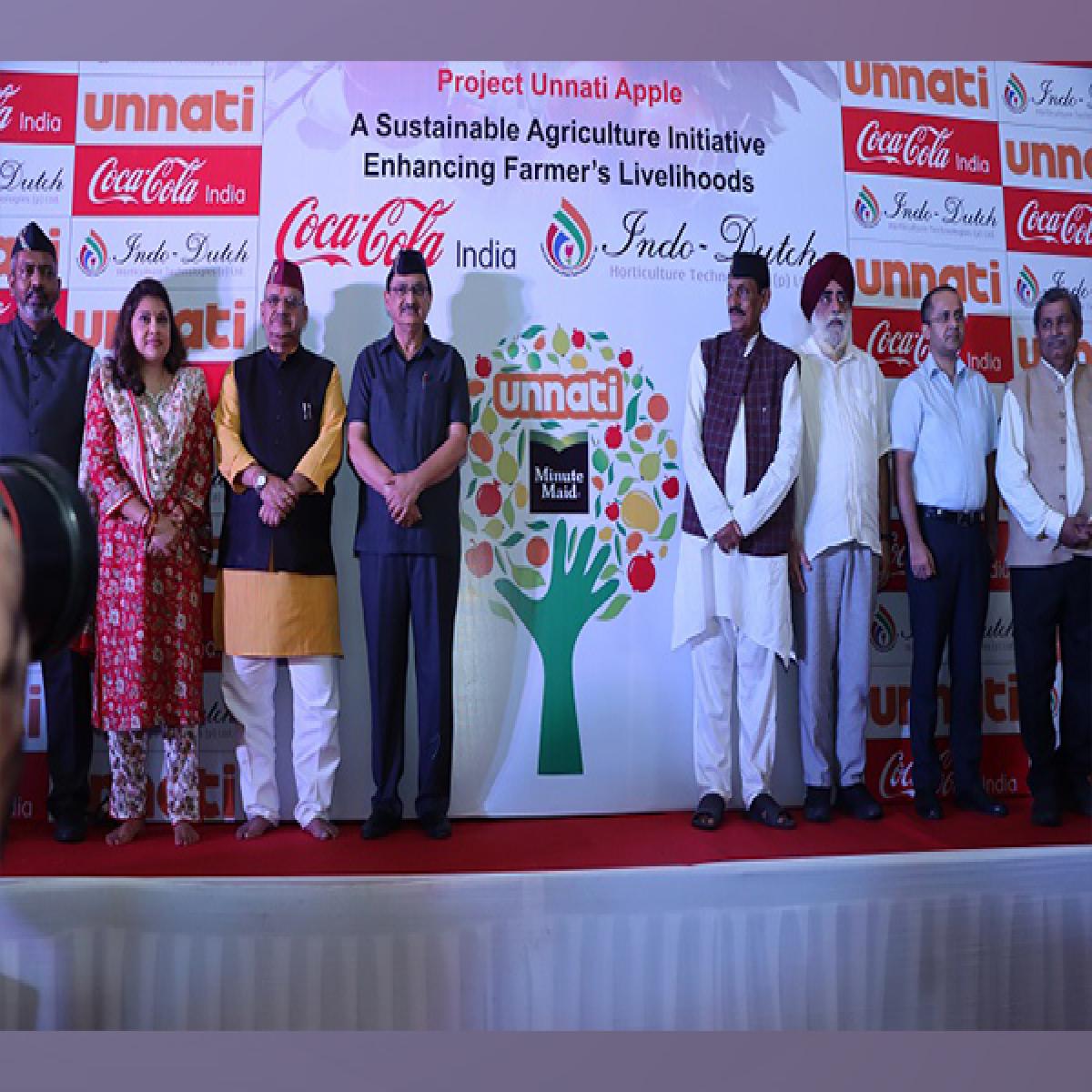 20 farmers were recognized for the exemplary productivity benchmarks they have been able to achieve by adoption of Good Agricultural Practices (GAPs) in apple farming. It has led to a 5X increase in their productivity, empowering them to enhance their incomes and uplift their livelihoods. Introduced to them by Coca-Cola’s Project ‘Unnati-Apple’, in collaboration with Indo-Dutch Horticulture Technologies, the aim is to increase apple productivity in India, especially in the State of Uttarakhand, by bringing global best practices primarily focusing on ultra-high-density plantation (UHDP), leading to a substantial increase in quality, productivity, and profitability per unit of land, hence significantly increasing farmers income and acting as a catalyst to help India in achieving self-sufficiency in apple production.

Commenting on the ‘Unnati-Apple’ initiative, Hon’ble Chief Minister, Uttarakhand, Pushkar Singh Dhami, said, “In Uttarakhand, there has been a strong emphasis on creating an ‘Atmanirbhar Bharat’, the Indian government’s call for our nation’s economic self-reliance. Coca-Cola India and Indo-Dutch Horticulture Technologies’ joint initiative ‘Apple Unnati’ is helping the state increase apple productivity manifold. Geared towards creating a model of sustainable agriculture and uplifting the lives of farmers, the initiative has successfully empowered the Agri-community in our beautiful state of Uttarakhand. I applaud the efforts of the two organizations and the farmers who have made this a commendable success.”

Project Apple Unnati, launched in 2018 under the flagship sustainable agriculture program of Coca-Cola in India - Fruit Circular Economy, aimed to aid the Indian agri-ecosystem by enhancing farming efficiency, strengthening forward linkages, and building food-processing capacity in the country, addressing challenges of low farm productivity, poor technology adoption and fruit wastage in the horticulture sector. Coca-Cola recognizes farmers to be its true suppliers for key ingredients and values the partnership by focusing on their overall well-being. Along with partners, the company has been working with fruit farmers since 2011, under the flagship project – Unnati, which currently covers 6 fruits – Mango, Apple, Orange, Grapes and Litchi and priority commodities like sugarcane. The program has benefitted 3.5 Lakh farmers so far.

Ms. Devyani Rajya Laxmi Rana, Vice President Public Affairs, Communications and Sustainability, Coca-Cola India & Southwest Asia: “Farmers are the backbone of the Indian horticulture system. We are humbled to play a part in helping them enhance productivity and uplift their livelihoods through ‘Project Apple Unnati’. We are humbled to have been graced by the presence of Shri Ganesh Joshi, Agriculture Minister, Uttarakhand and Mr. Shailesh Bhagoli, Secretary, Agriculture, Uttarakhand, during the farmers’ felicitation ceremony today. Apple Unnati is part of Coca-Cola India’s Fruit Circular Economy Initiative, which extends to fruit farmers across 12 states & 6 fruit varieties in India.”

Mr. Sudhir Chadha, Director, Indo-Dutch Horticulture Technologies, said, “Project Apple Unnati in partnership with Coca-Cola India has enabled thousands of farmers in the state of Uttarakhand. In fact, Coca-Cola India has been one of the first-ever organizations in Uttarakhand to initiate positive interventions in the space of sustainable agriculture. The success of this project is indeed encouraging the youth and we have observed reverse-migration in the state. We thank Coca-Cola India for their continued support and for bringing about this revolution in apple farming.”